Top 10 Places to See in Italy Before You Die

Top 10 Places to See in Italy Before You Die

One of the most beautiful countries in the world is Italy. In fact, the country has so much in it, it would not be an exaggeration to say it equals discovering the rest of the world. Right from the sculptures to restored buildings, from the ruins like Colosseum to great piazzas, from food to wines, Italy has so much to in herself to offer that it might take a lifetime to witness everything.

Well, you don’t obviously have to stay for a lifetime in Italy, there are some famous places in Italy that you must see on your Italian vacation. These places are hand-picked by us for you.

Get your bucket list ready, here are the top 10 Best Places to visit in Italy before you die. 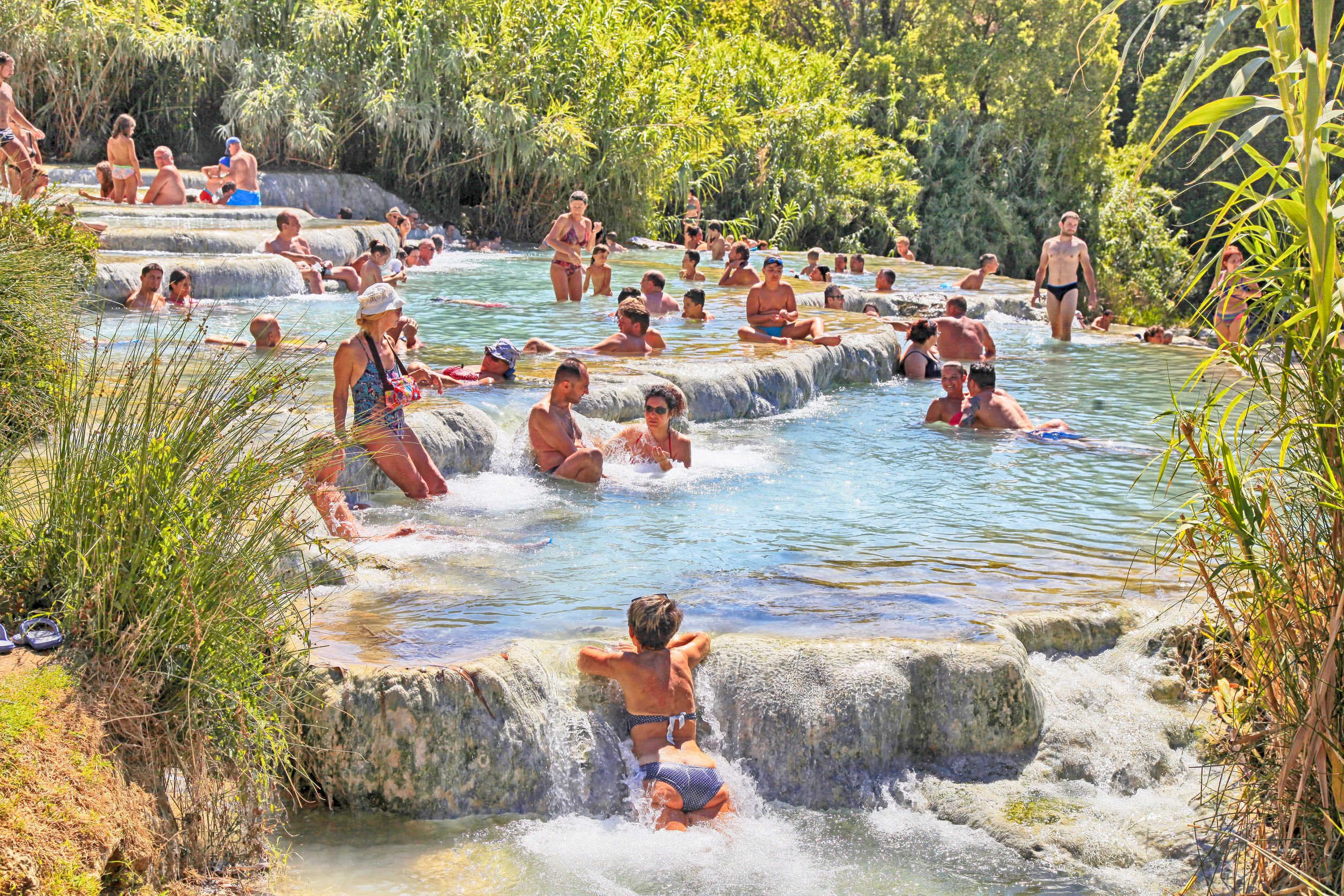 Going to Italy and not visiting Tuscany just can’t happen. The birthplace of the Italian Renaissance, Tuscany has a historical significance which dates back to 800 B.C.—The Etruscan Civilization. Visit Tuscia to witness the most stunning remains of the ancient civilization. One such spot is Terme di Saturnia.  Translated to English Terme di Saturnia becomes Saturnia Spa. It is a naturally created hot water spring, near the village of Saturnia. According to the legends of Etruscan and Roman Civilizations, it formed when irate Jupiter threw lightning bolts at Saturn during a violent squabble. The lightning bolts eventually missed Saturn and formed the Terme di Saturnia. The water at 37 degrees makes the spring an amazing spot to get a warm and cozy spa experience. The Jupiter-Saturn conflict is a part of the folklore and warm flowing water has a scientific reason. The deposition of Calcium Carbonate from the natural sulphurous hot springs got accumulated for thousands of years and this could be the reason for the warm gush of water. Cascate del Mulino is one of the two waterfalls which is loved by the tourists. Apart from the warmth the water of the spring provides, the sulphur and other minerals are considered to have a therapeutic effect on the body, curing minor ailments.

2. House of the Small Fountain 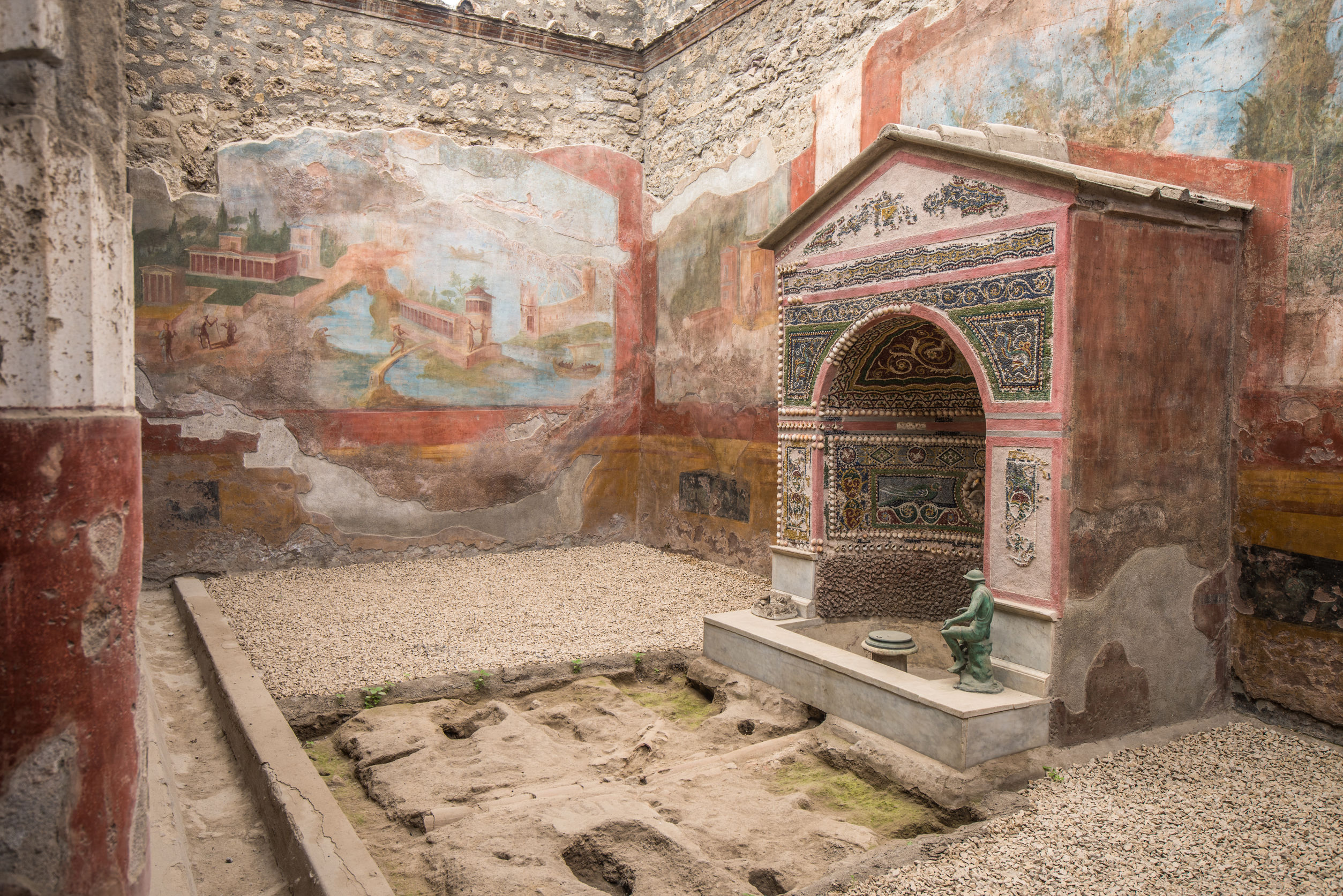 One of the most sought after places in Italy by geologists to historians, tourists to locales is Pompeii. The place has a heart-rendering history, which goes 2000 years back. The deadly destruction of the city of Pompeii in 79 AD due to a catastrophic volcanic eruption of the adjoining Mount Vesuvius, even today is considered as one of the 16 deadliest Volcanoes of the world. One of the most disastrous in human history, it is estimated that the thermal energy that was released during the eruption was 100,000 times more than the horrific nuclear bombing of Hiroshima and Nagasaki. Although there are a lot of ruins to be seen in Pompeii, one you must visit is the House of Small Mountain. It is the remains of an ancient house at the western end of the city of Pompeii which has a beautiful fountain that has been recently restored. The construction of the house tells about the architectural splendour of the time it was built in. The fountain-nymphaeum, from which the name of the house is derived, is believed to have become a fashionable feature in the 1st century A.D. Much of the house is heavily decorated with mosaics and sculptures. 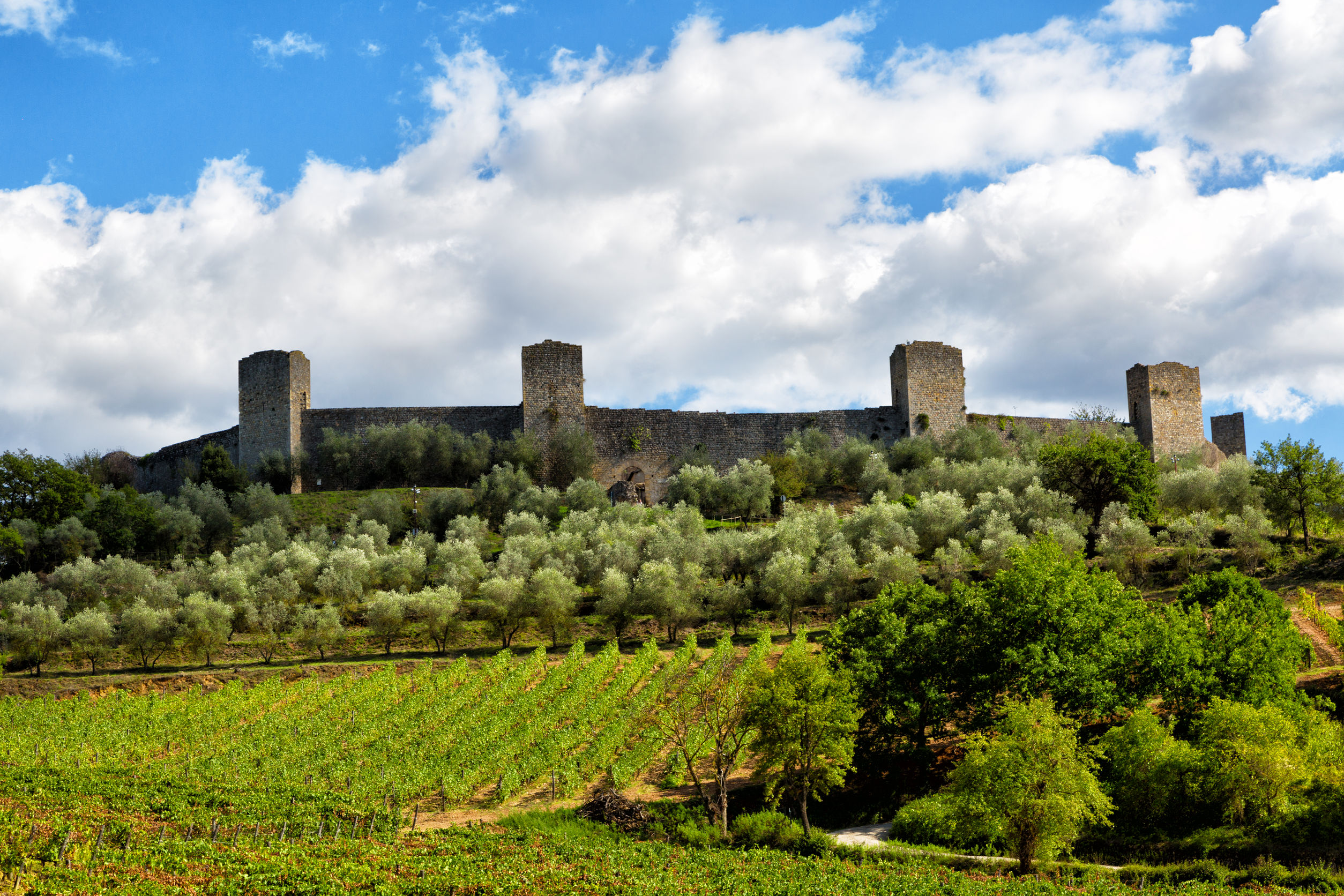 Although Tuscany is full of picturesque places, the Monteriggioni Castle adds to its beauty. The castle has been quoted by greatest poets such as Dante, in his popular poem- The Divine Comedy. The castle is actually a burg that is situated on a hilltop in the province of Siena and was built by the Sienese from 1213-1219. The construction of the castle was strategic which was actually a fortification against Florence. That period was marked by conflicts between Florence and Siena and thus Siena needed a stockade against Florence. Most of the burg is intact today with only a few changes made in the 16th and the 21st century. Monteriggioni is one of the beautiful Italian castles in the picturesque Tuscan region. Decommissioned in 1901, the 1900-year-old citadel has witnessed days of power, refuge, and incarceration. The construction of Castel Sant’Angelo started in 123 A.D and was commissioned by the then Roman Emperor Hadrian. Hadrian wanted it to be built as a mausoleum for him and his family. Later, in the 14th century, the building was converted into a castle by popes under the orders of Pope Nicholas III. An 800-meter fortified corridor was built around it, which is known as Passetto di Borgo that connected it to St. Peter’s Basilica. There came a time when the castle was used as a prison by the Papal state and executions were performed in the inner courtyard. The year 1527, saw the sack of Rome Charles V of Spain, during which the Passetto di Borgo helped Pope Clement VII to take refuge. Castel Sant’Angelo is a 5-storied building today, with a spiral ramp connecting the 5 floors.

90 Kms east to Ponza is one of the Flegrean islands of Procida which is separated by 40 Kms from Naples on the mainland. Procida has a significant history since ancient times and lately has been culturally stirring. The beauty of Procida has been alluring novelist and filmmakers for a long time now and got its own film festival- Procida Film Festival in 2013. There are many religious traditions on the island which are tied to the period of Holy Week. One of them is the Procession of the Apostles of Holy Thursday and the Procession of the Mysteries of Good Friday. Mysteries of Good Friday is based on a tradition going back to the end of the 17th century in which the young males of the island, dressed in the traditional dress of the “Confraternity of the Turchini”, carry allegorical wagons which are called “mysteries”. 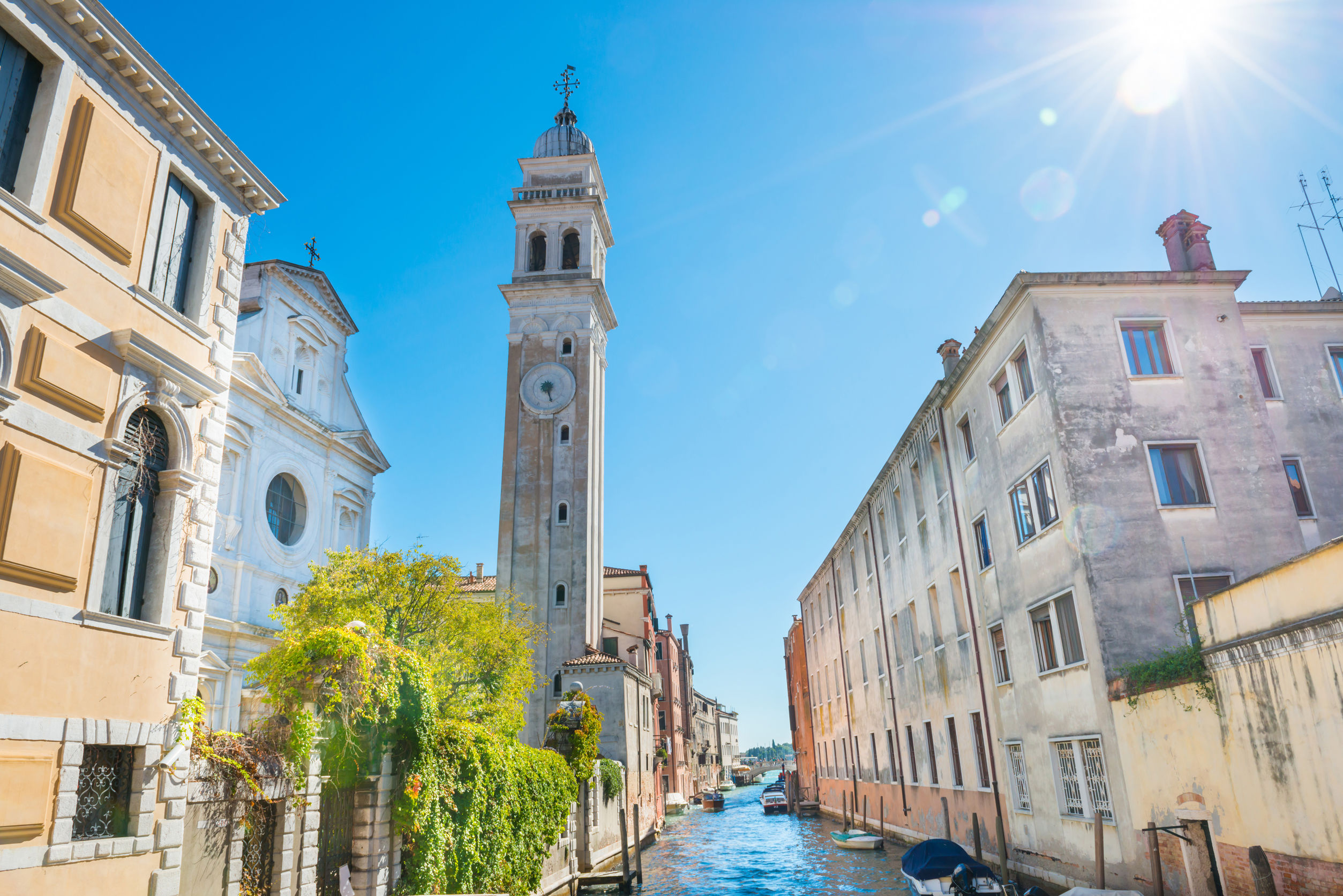 From castles to ruins to islands, here come the campaniles. The literal meaning of a Campanile is an Italian bell tower. Hearing about towers, The leaning tower of Pisa might come as the first thing in mind, but Italy is home to a myriad of leaning towers, one of which is The Campanile of San Giorgio dei Greci. Situated in Venice, the literal translation of San Giorgio dei Greci is ‘Saint George of the Greeks’ and thus the name spells something about the Greek connection of Venice. The bell tower is a part of the Church of Saint George of the Greeks which is a symbol of the Confraternity of the Greeks in Venice. For a long time, Greek Orthodox rites were not permitted in Venice, but in 1498 the Greek community finally got the rights to establish a confraternity known as ‘Scuola de San Nicolo dei Greci’. In the year 1539, after almost 40 years of granting of rights, the Greek confraternity was allowed to build a church which was known as the Church of San Giorgio (St. George). However, the construction of the bell tower didn’t begin before 1592.

7. The Campanile of Santo Stefano, Venice Another stunning leaning tower in Venice itself is The Campanile of Santo Stefano. This leaning bell tower from 1544 is one of the highest bell towers of Venice, standing at 66 meters high and has an inclination of 2 meters. The tower is located in the neighbourhood of San Marco and still has the late renaissance electromagnetic bells. It has been rebuilt and refurbished a couple of times. In August 1585, lightning struck it down melting its bells, later the bells came from England. Once again in the early 20th century the bell tower was once again damaged in an earthquake of 1902. The quake shook the base of the tower which resulted in the consequent inclination. Rome is world-famous for the Colosseum, St. Peter’s Basilica, Castel Sant’ Angelo, Ponte Sant’ Angelo, Pantheon and much more. But it has something equally exciting beneath- The Catacombs of Rome. Catacombs were man-made subterranean passageways primarily created to carry out religious activities. Yes, they are frightening yet have been very popular with tourists since their discovery. Out of many such catacombs, one is the Catacombs of Domitilla. These Catacombs are spread over 11 miles of underground caves and are the oldest of Rome’s underground burial network. With around 150,000 bodies buried in this Catacomb, it is the only Catacomb to still contain the bones. 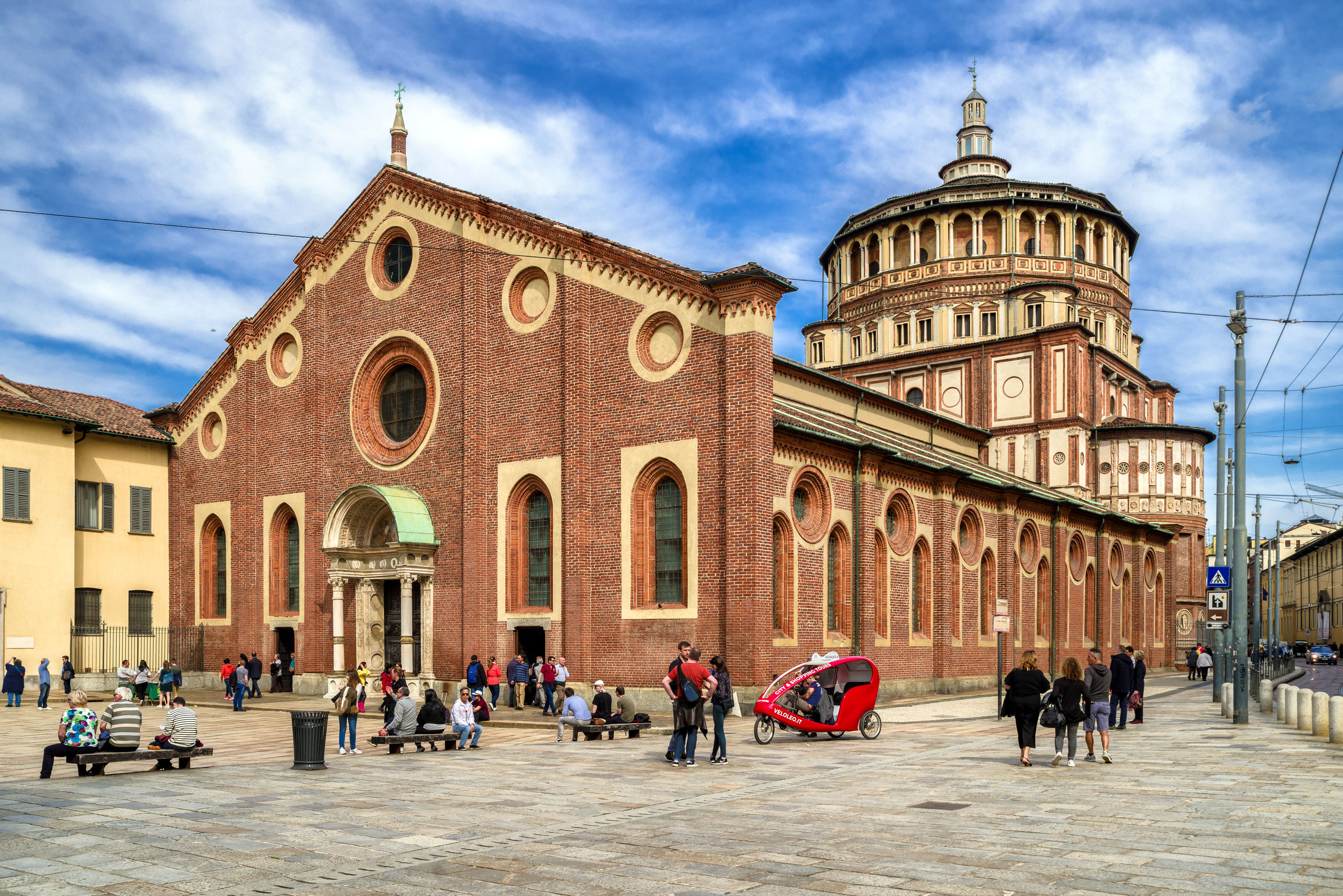 What civilization is to mankind, art is to Italy. The birthplace of Renaissance, Italy has produced polymaths, sculptors, and painters who gave the world a whole new dimension. One of them was the great Leonardo Da Vinci. One can find his greatest works across Italy, but one such amazing piece of art is in the city of Milan. Santa Maria Delle Grazie, The Holy Mary of Grace is a church where you would find one of the most popular works of Leonardo da Vinci’s ‘The Last Supper’. The world-famous painting was painted directly on the wall thus known as a mural. Leonardo used the medium called fresco-secco to paint this masterpiece on the wall of Santa Maria. To keep the half-a-millennium old painting best preserved, only 25 people at a time are allowed in the refectory. The Vatican, often synonymous with Rome and the other way round is one of the biggest reasons people from across the globe visit Rome. The smallest country of the world has one of the most mesmerizing monuments—the Vatican Museum. About 6 million tourists, visited the Vatican Museum in 2017 and made it the 4th most visited art museum in the world. The museums are Christian and art museums with about 20000 works on display out of the 70000 collected by popes over centuries. With over 50 art galleries, courtyards, and halls that make up the museums with the famous works of Michelangelo (frescoes of the Sistine Chapel) and Raphael (Raphael Rooms) is absolutely breathtaking. The museums possess the greatest collection of Renaissance art and many other antique artifacts such as Laocoon, Porphyry Basin, and many more such awe-striking, splendid piece of arts. The sheer size and the magnitude of the art that has been preserved in the Vatican Museums would make you awed for the rest of your life.

There could be 10 other places to visit in Italy before you die, but Italy is diverse and by this enlisting the above mentioned 10 places, we have tried to cover different aspects of the beautiful country.